“A Journey to Wonderland” is a cinematic creative short film for ELLE Magazine directed by Davy and Kristin McGuire.

Directed by:  Davy and Kristin McGuire

For the 25th anniversary of ELLE Magazine China Davy & Kristin McGuire were commissioned to design and direct a short film featuring the leading Chinese actress Xhou Zun wearing Chanel outfits and jewelry. The film was created as a digital accompaniment of a special editorial for ELLE China‘s iPad edition. 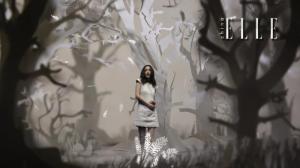 A Journey to Wonderland follows a young girl‘s dream into the magical world of a story book in which she travels through film sets made of paper and diamonds. The girl gets lost in an enchanted forest, she sails the sea in an ornate paper gondola and when she reaches the shore she catches sight of a beautiful, abandoned mansion. As she dares to enter its secret halls the girl finds a precious diamantine lion that will bring her luck when she wakes up from her dream.