“Motorized Photographs Of Sunset Blvd. And Other L.A. Streets” is a Cinematic Poem Short Film Featuring Ed Ruscha with excerpts of Jack Kerouac’s “On The Road” Directed by Matthew Miller. 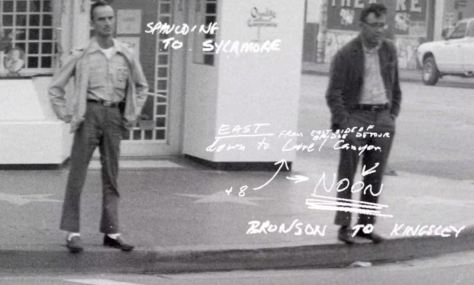 Commissioned by The Getty Museum on the occasion of their 2019 Getty Medal to the painter, draftsman, photographer, and bookmaker, Ed Ruscha. Utilizing The Getty Research Institute’s preservation and digitization of over a million images from Ed’s Streets of Los Angeles photo series, and excerpts from Jack Kerouac’s “On The Road,” this film puts together two of Ed’s major inspirations: Kerouac’s text and the city of Los Angeles.

Along about three in the afternoon, after an apple pie and ice cream in a road-side stand, a woman stopped for me in a little coupe…

The greatest ride in my life was about to come up…

The driver was fiddler for a California cowboy band. He had a brand-new car and drove eighty miles an hour.